It is recorded that a basic trampoline-type piece of apparatus was invented in the 19th century by a French neurologist to provide therapy for brain injured children. He named the apparatus the "Trampolino". ("The Diagnosis and Treatment of Speech and Reading Problems - Carl H. Delacato -1963).

The folding sports trampoline with which everyone is familiar was invented by George Nissen in the 1930s. (Wikipedia)

As headteacher in Cleveland LEA at Springwell School (age range 2 - 19) and finally at Catcote School (age range 11 - 19) Eddy Anderson developed Rebound Therapy as a staff development unit course. During this phase, recorded reports were generated by the Sports Council, and the Schools Council. Interest was shown by the Chartered Society of Physiotherapists. Liaison with the British Trampoline Federation was ongoing. Original tutor training courses for CSP and BTF were provided by Eddy.

Eddy retired from teaching full time to set up his own consultancy. In March 1993 Eddy was awarded the Toshiba "Year of Invention" award in the small business section for his hydrotherapy floatation device. Originally named Float Station, this product is now manufactured and marketed by Gym-Tech.com under the name of Sensafloat. "This invention was the result of continual search for movement facilitators for students with severe and profound disabilities".

Eddy Anderson joined forces with pioneer disability sports coaches and founders of the Saturn V association of gymnastic and trampolining clubs, Paul and Shirley Kaye. They formed the 'ReboundTherapy.org' website and consultancy. 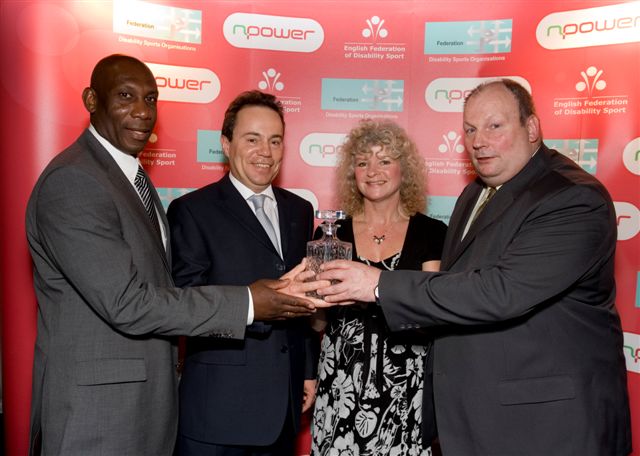 Eddy Anderson, Paul Kaye and Shirley Kaye from 'ReboundTherapy.org' were invited to attend the Federation of Disability Sports annual sports awards event which was held at Leeds United football club on 20th March 2009.

We are very pleased and honoured to tell you that we were presented with the ‘npower Community Award’ for services to disability sport. The presentation was made by well known football referee Uriah Rennie (far left) on behalf of the Federation of Disability Sports Organisations and George Bloom (far right) from npower.

The award was an engraved crystal decanter which Paul and Shirley collected and will be kept by Eddy in recognition of his 35 years tireless work in the development and provision of Rebound Therapy training courses.

Rebound Therapy training course accredited by South African Society of Physiotherapy and US Federation of State Boards of Physical Therapy.